This is the second time I have looked for local sidereal time (LST) based influences on the GCP
data. My first exploration made some assumptions that may have weakened the effect, and also
ignored some fundamental issues involving what was being looked at. I had initially looked at
only two years of data, and had lumped the data into two groups: Northern and Southern
hemispheres. If there is a galactic effect related to either the galactic center or to the angle
relative to the galactic axis it would be much preferred to take the actual angle from each
generator to the influence source rather then simply lump generators at different latitudes
together based only on local sidereal time. The angles are formed by finding the three
dimensional angle between the observer [right ascension(LST) and declination(latitude)] and the
source [right ascension and declination]. The angles to the galactic center and the galactic axis
will change dramatically for observers at the same LST but at different latitudes. Here are three
graphs illustrating the differences for +45, 0 and -45 degree declinations (latitude).

If there is a source of influence that is not related to the previous two galactic elements it may be
found by making a star chart with the x axis consisting of right ascension(LST), the y axis
consisting of declination(latitude) and filled with colors based on the results of the tests Z-score
for each point.


The GCP data consists of 1 second samples of 200 random bits with each bit having a
probability of 0.5. Therefore the theoretical mean will be 100, and the theoretical standard
deviation will be 7.071. For the purposes of this study I have taken each of these samples and
have converted them to a z score using the empirically determined standard deviation of the
samples generator. I then took two approaches to arrive at a testable value. First I square the z
score samples and add these products to find the variance. I then increment a count for keeping
track of the number of products (N) placed in that particular bin. The second approach was to
get the autocorrelation sum and N of the samples using lags from one to ten seconds. For each
type of test I added product data and then incremented the N count to one of 1440 bins based on
the individual generators LST in minutes. When all of the data had been placed in bins I saved
the bins to a file for use latter in making a star chart like graph. I then made common bins that
all the generators would use and went through each generators LST minute bins and placed its
data in common bins according to degrees to galactic axis and then in bins according to degrees
to galactic center. I ran this procedure eight times, once for each year 1999-2006 and these
yearly common bins were then saved with the sum and N values so that the data could be
examined for the year or combined with data from other years.


Here are the graphs for the variance measurements with each point being the center of a 15
degree average window.


These are the graphs for the autocorrelation lag = 1 measurements with each point being the
center of a 15 degree average window.

There does not seem to be any large deviations from chance in the variance tests, but the
autocorrelation graph for degrees to galactic center seems to have an unusually negative slope.
The calculated slope using all available data points of the unaveraged data is -0.003924. I
generated 100 random slopes from random data of the same number of unaveraged samples used
to find the slope and found that indeed the slope is more negative then usual. The graph of the
results of this control test is presented here.

The graph for autocorrelation lag 1 also has two extreme values one positive and one negative
that are not surpassed in the same charts for lags 2 to 10, although one point in lag 8 comes
close. It is also very interesting that the negative most point is also the point closest to 180
degrees, and the positive most point is near zero degrees. Here are the simplified charts for the
autocorrelation lags 1 to 10 of the degree to galactic center charts.

Searching For Other Celestial Influences


In order to test for other possible influences of Celestial origin I have created a sort of star chart
for each of the two test types. Each point is an average of 15 degrees in both the right ascension
and declination directions with the averages wrapping around the zero hour of right ascension. 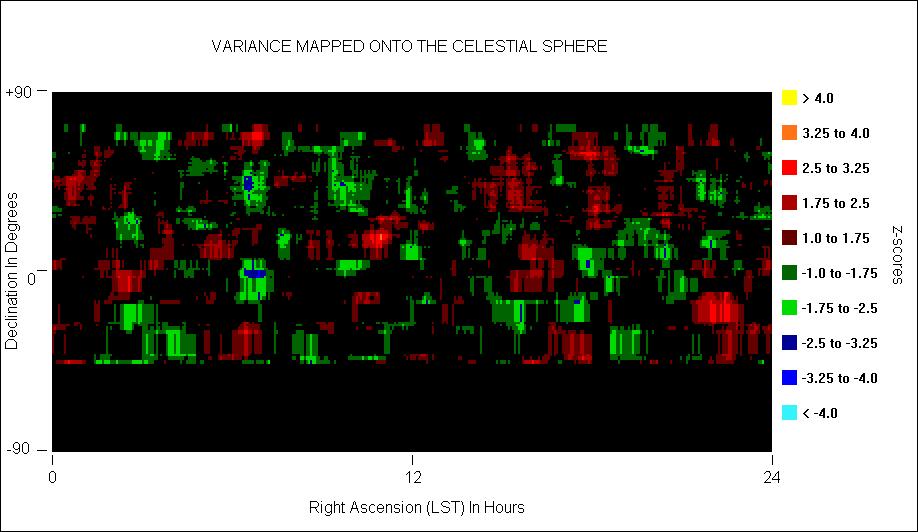 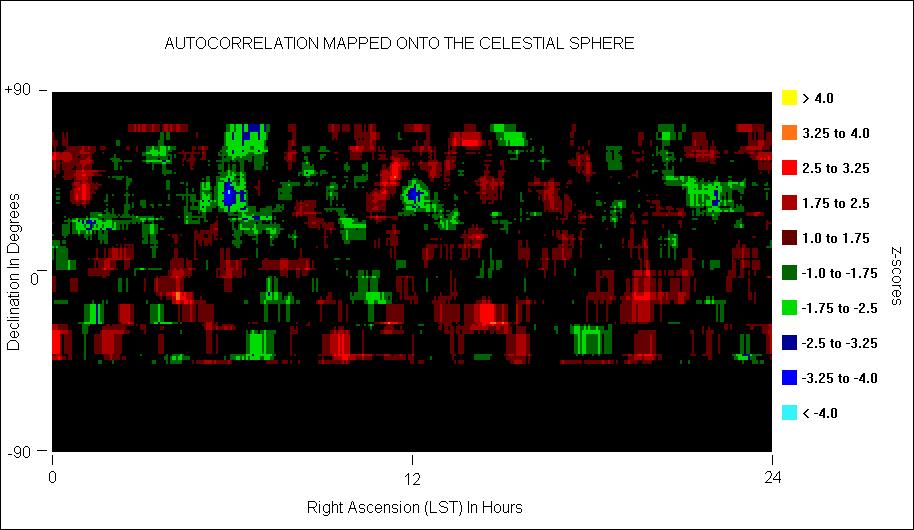